There’s a very funny story about this trip. When I moved to Texas, the very first thing that I searched for was -BBQ restaurants. I started reading food blogs and some travel documentaries and guess what, I found “The Big Texan Steak Ranch” in Amarillo. Supposedly, they offer the largest Steak which attracts thousands of people from around the country. And then I knew, I had to go there.

Amarillo is the most popular city on Route 66 in Texas. As we know, most of the cities almost vanished along Route 66 and people often travel Route 66 to feel the old heritage of the ruined cities. But Amarillo not only survived  but flourished as yellow ( Amarillo in Spanish) rose and became more popular over the time. Hence this honor of being named as Yellow Rose of Texas.

From Plano or Dallas area, it’s a small drive and will take no more than 6 hours. US 287 via Wichita falls is the best route you can take. After Wichita falls, the traffic gets sparse and soon I was cruising on beautiful country roads. The last time I have driven on such open country roads was probably in Australia. The major difference was the speed limit, its 75 mph which is awesome. It was like  Autobahn for me and my bimmer got a taste of its birth place for a while, well, sort of. Disclaimer- there are several small cities in the route and cops were spotted, so do not quote me on that Autobahn analogy and do not blame me for your speeding tickets :).

Anyways, as I was saying, there are several small cities in the route, rest areas and gas stations to instill some night driving confidence. Yes, I started my trip at 2 AM and it was a smooth, no hassle drive. At some stretches, I was the only one with no cars for 30 mins or so but it never felt scary. I stopped at those small cities (Vernon, Clarendon, Memphis etc)  just to get an idea on the localities. The cities were tiny but enough for 20 mins break. Also, I noticed a couple of historical markets along the route which I am going to explore soon.

Instead of going directly to Amarillo, I thought of visiting Palo Duro Canyon, which is like 20 miles from Amarillo. A beautiful ranch road leads to the canyon and the weather made it more enjoyable. I expected some twisty canyon roads and I sure found them everywhere. If you love driving, you can spend hours here, just driving. 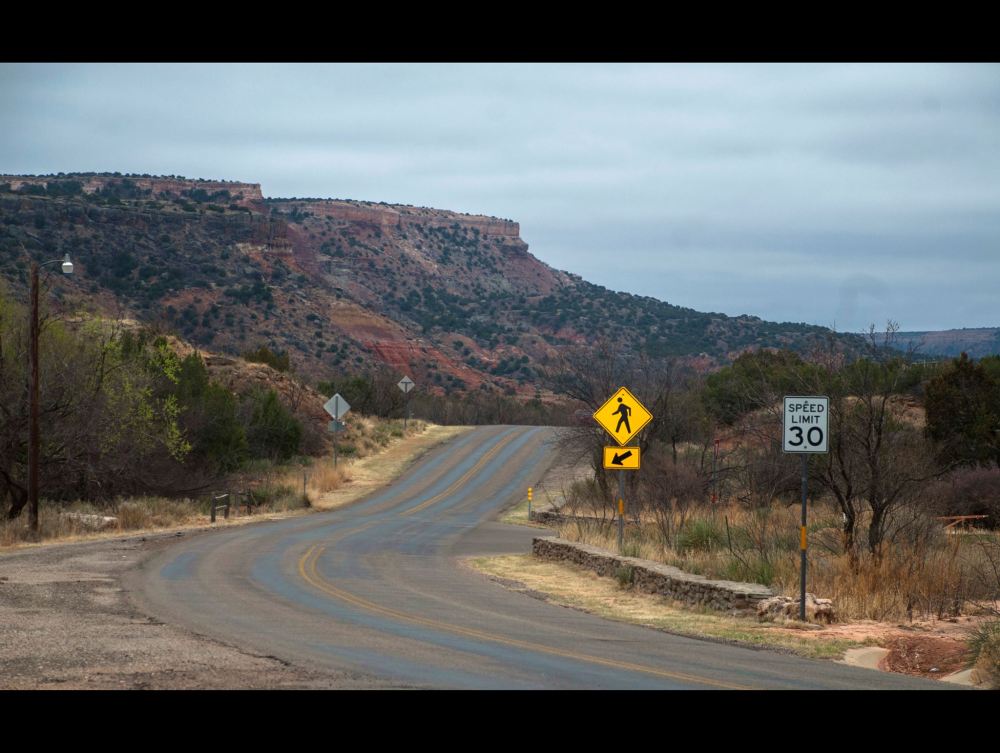 It’s also called the “Grand Canyon of Texas”. Honestly, this is way too miniature version of Grand Canyon but worth  a visit nonetheless. Visitor center informed me the weather gets real hot during summer, so I would skip this park in summer. There are  lot of campgrounds and picnic areas for a perfect family trip.

Looks weird right ? It was equally weird to actually be there and witness this crazy abstract art.

Cadillac Ranch has become the usual site for those who travel  the Mother Road, Route 66. In 1974, a group of crazy artists from San Francisco built this public art on a private property of a local millionaire. This is still on a private property but everyone is encouraged to visit the area and even use their own spray paints. 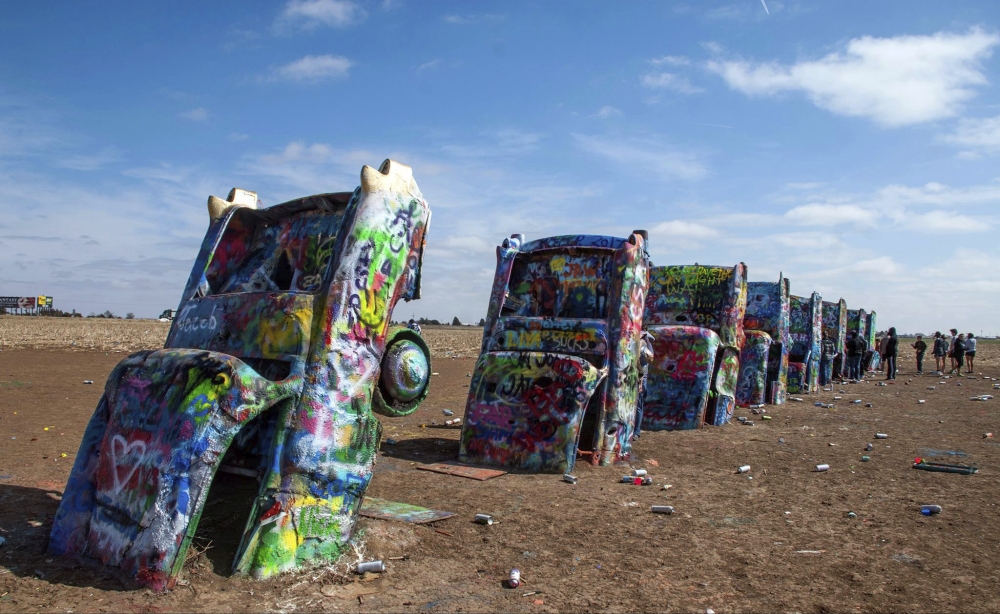 The cars can easily be spotted from i40 and

there’s an access road where you can park your car and walk till the buried cars. Look at the Google Earth image to get an idea of this craziness. 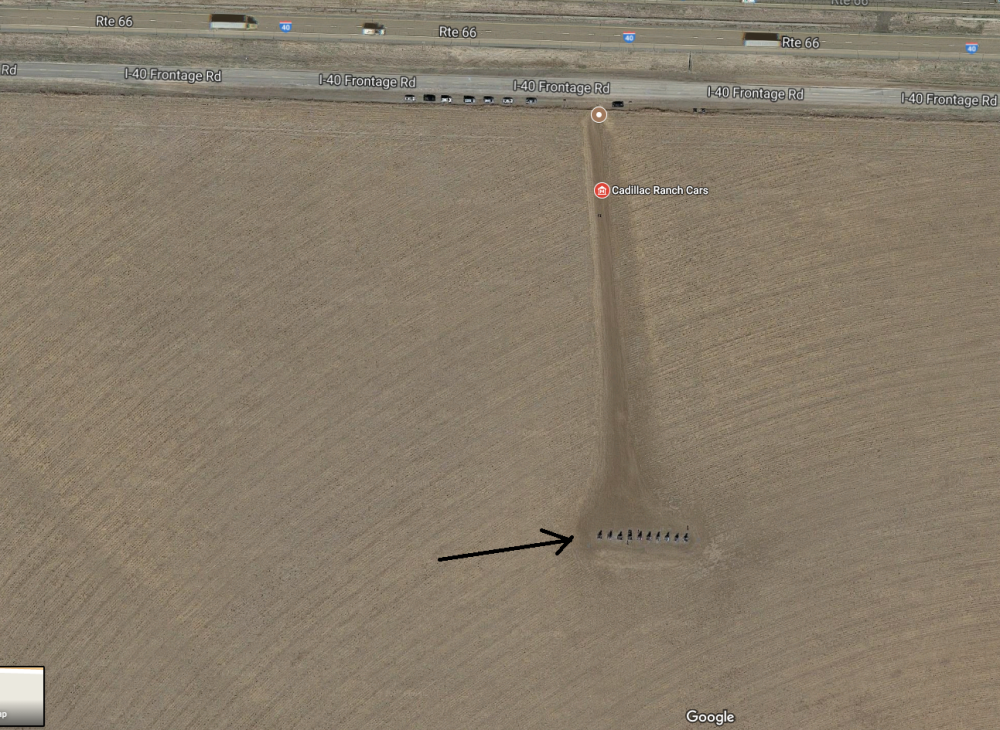 It is said that the cars are buried longer than they were on roads. Must be true.

I am not a food critic by any means but can be called a foodie. In the past, I did some of the craziest road trips for the love of food. This is one such craziest trips. 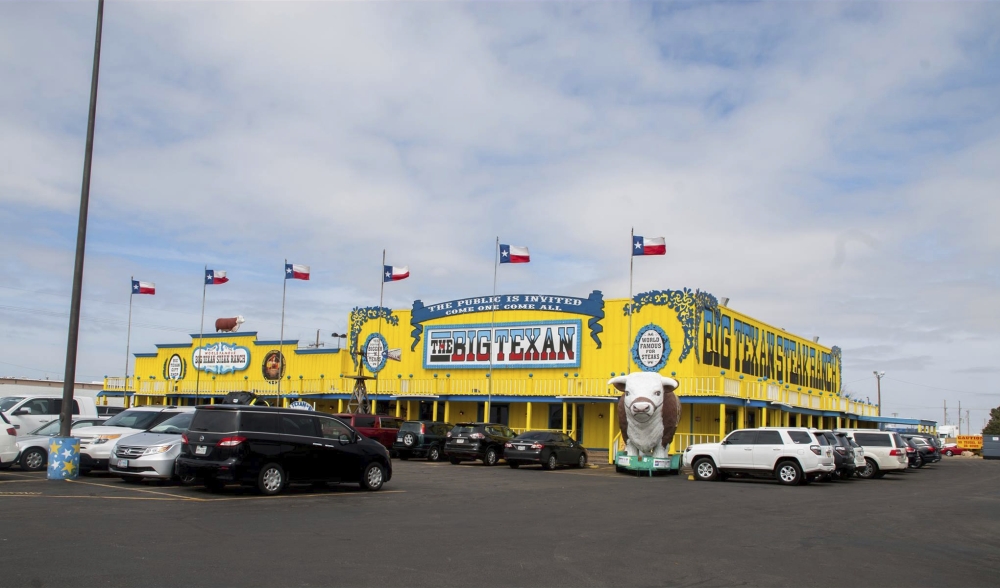 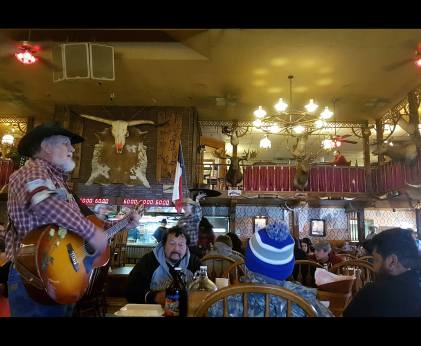 This is more than a restaurant- a tourist place, souvenir shop, an unforgettable experience of the old west Texas. The parking lot starts filling in as soon as the restaurant opens for breakfast. If you are there for lunch, there’s always a wait time but you can spend that time in the souvenir shop and looking around. I specifically mentioned about the shop as they have some of the rarest local art works and handcrafted items. Oh, did I mention about the restroom ? Yes the restroom. It looks classic with the old wooden fixtures.

So about the food. It’s the home of 72 oz ( 4.5 lbs) steak. If you can eat in 1 hour, its free. Apparently, that’s one of the reasons this restaurant gets a lot of attention from around the world. Most who attempt the challenge cannot finish one Steak, as I was told. So will you take up the challenge to get featured for the next couple of generations ( or more) ? 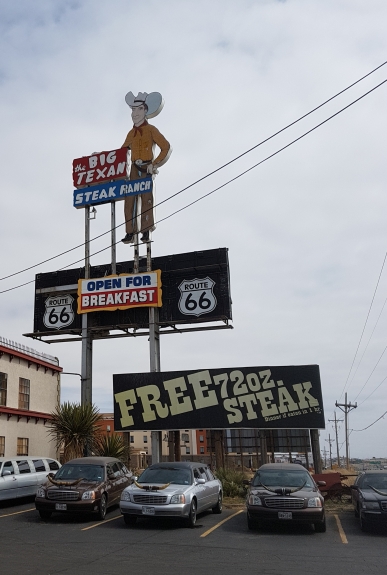 And no, I did not dare to try the free steak.

To get a glimpse of the Route 66, travel along the marked road and enjoy the vintage peeks. You will notice some of the oldest stores, houses, post offices- enough to experience old heritage of Route 66. There are several parking spots so I would recommend you park your car and take a walk.

For the food lovers, check out “It’s a punjabi affair“. 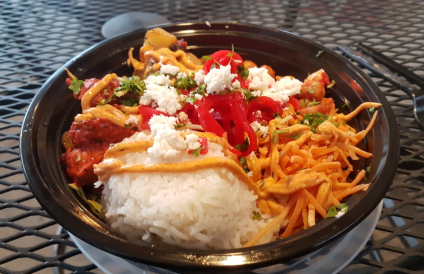 It’s not a typical  Indian restaurant- but a fusion Indian food. I ordered a chicken salad and was not expecting the way it looked. But it tasted damn good. Don’t let the size of the restaurant fool you- they have inside sitting as well with heaters during cold ( you will love the small ambiance).

Whenever I am traveling northern side of Texas, I always base my stay in Amarillo. The location is very convenient, the hotel rates are cheaper, delicious food options and along the Route 66. What else you want for an overnight stay ? I will keep on updating this page as I travel there for my future trips.

Are you still thinking about that 72 oz Steak  ?